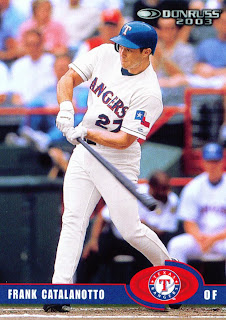 Three days left until the start of the season and the Rangers seem to have finalized their roster. Sadly Frank Catalanotto isn't on it. Catalanotto, seen here on card number 213 of the 2003 Donruss set, was released by the team yesterday. Apparently the club liked Andruw Jones' righty bat over Cat's lefty one. Ok Jones, you got the spot, now prove that you deserve it. If you don't come with your A game Brandon Boggs is behind you and still hungry.

Catalanotto wasn't the only player who left camp yesterday. Pitchers Derek Holland, Neftali Feliz, Doug Mathis, and Tommy Hunter were all sent to the minors. First baseman Joe Koshansky was placed on waivers. The Rangers are hoping he clears so they can keep him in the minors.

Omar Vizquel was told that he has made the team. After all the paperwork is done the team will be ready for the season.
Posted by Spiff at 7:16 PM

I hope they have Jones on a short rope.

Oh, I hope Jones doesn't put you through what he put me through.