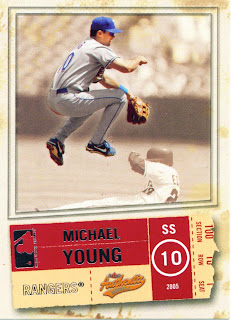 Texas won last night to avoid getting swept at home by the Royals. They did it by the skin of their teeth and by Michael Young's ninth inning home run. Young, pictured here on his 2005 Fleer Authentix card number 50, hammered the second pitch he saw. It was his first ever career walk-off homer and he seemed to be enjoying it.

Mike was helped out by Ian Kinsler's dinger earlier in the game and by a nice slide from Hank Blalock to score in the eighth. Vicente Padilla had a rough outing as he gave up five runs to KC in five innings. Can't do that very often and get away with it.

Josh Rupe is no longer in the Ranger's bullpen. He was designated for assignment on Saturday. Pitching prospect Derek Holland was called up from Triple A. Holland is a starter but will be in the bullpen for Texas for the time being. Supposedly this kid can really pitch. I'm hoping he can and that this is not a David Clyde repeat.
Posted by Spiff at 7:51 AM

The Rangers haven't had the worst start to the season and will need to do well to get past Seattle, Oakland and LA. Been a long time since they've been to the playoffs but if Tampa can make it - surely anyone can?

I know the Rangers lost on the 18th when my wife and I were there, but we had a great time anyway! I love making the drive down to Arlington to catch a game (though I have only done it twice so far in my life)!!