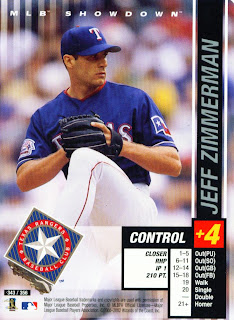 According to MLB.com, Seattle signed Jeff Zimmerman to a minor league contract yesterday. Zim, seen here on number 343 of the 2002 MLB Showdown set, hasn't pitched in the majors in over eight years. The Mariners are hoping to see him on the mound before the end of the year though.

I have always had a soft spot for Zimmerman. Few Rangers pitchers make any kind of splash but I remember him getting voted onto the All-Star team in his rookie year. Best of luck to Jeff on his comeback. I have to say though, I hope none of his success comes at the expense of his former team.

Not a whole lot else going on as far as I can see. Texas faces off with Cleveland again tonight. Two wins in a row to start the season would be nice but it could be a tall order with Carmona on the mound for the Tribe.
Posted by Spiff at 12:26 PM