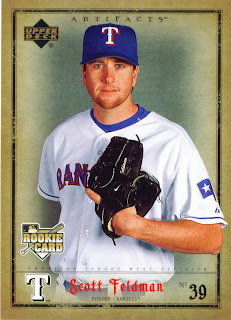 The Rangers continue to make moves as the season approaches. Scott Feldman, seen here on card number 91 of the 2006 Upper Deck Artifacts set, is officially assigned to the bullpen. Jason Jennings is also in there as well.

Kris Benson is the fifth starter. Hopefully he will only be needed for double-headers and the like.

Travis Metcalf, Kason Gabbard, and Derrick Turnbow have all been sent to the minors to start the season. Turnbow had the option to ask for his release but declined to do so.

KC Herren has been released. He was the Rangers second round pick in 2004 but never panned out.

The club still isn't sure what to do with Frank Catalanotto. Apparently Andruw Jones has put in a late push for the final bench spot and is the current favorite. Cat may get released if the team can't trade him.

No interest from other teams for Catalanotto but the Phillies have expressed some interest in Andruw Jones. The Reds are apparently eyeing Joaquin Arias. Could be some possibilities there.

It will be interesting to see how all of this shakes out in the final days before the season starts. Could be a fun season.
Posted by Spiff at 2:33 PM