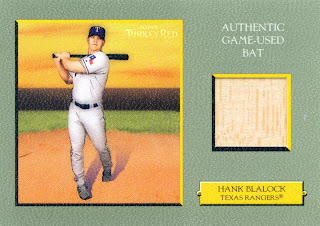 The rain continues here in the Midwest. Perhaps the Rangers are wishing that is had rained again today in Arlington as well. Today's loss to the A's sees the Rangers ending April with a 10-11 record. The team had hoped to end the month with a winning record but the bats just couldn't get going.

Andruw Jones and Hank Blalock provided all the Texas offense with solo home runs in the eight and ninth. Blalock, pictured here on 2006 Topps Turkey Red Relics card number TRR-HB, cranked his sixth homer of the season in the eighth. Jones sent his third into the seats an inning later.

The shots weren't enough to counter the four runs the A's had put on the board though. They had three off of starter Vicente Padilla and then added one more at the expense of Jason Jennings. Michael Young hammered a double in the ninth but was thrown out trying to stretch it into a triple. The team left 12 runners on base and was 0 for 6 with runners in scoring position. Just a dismal day on offense that matches the rainy and overcast weather where I'm at.
Posted by Spiff at 9:22 PM