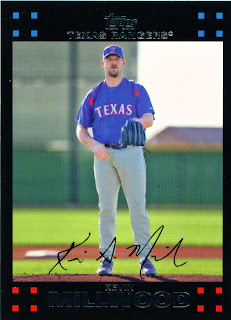 Kevin Millwood, seen here on card number 382 of the 2007 Topps set, turned in an oddly dominating performance yesterday. He only allowed one run as the Rangers roughed up the reigning Cy Young winner in a 9-1 beating of the Indians.

It is really nice to start the season off with a win. Nicer still to see a starting pitcher go seven innings and keep the opposing offense handcuffed. If the pitching staff can do that in half the games this season then the team has a chance. Perhaps Nolan Ryan's philosophy is starting to pay off.

Also good to see Elvis Andrus do well at the plate and on defense and to see that Hank Blalock's bat appears to be back. Over all the team looked good and the guys seem to be excited. It's only one game of many but to start the season with a win is a nice feeling.
Posted by Spiff at 12:58 PM