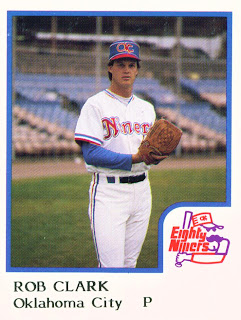 Not much going on with the Rangers today. Reports that they may consider moving some pitching to pick up key position players is about it. Since it is a slow day I decided to hit up the minor leagues again with another installment of "Whatever happened to that guy?"

Today we see starting pitcher Rob (or Bob) Clark on his 1986 ProCards card. I was unable to find much on Rob but was able to determine that he never made the big time.

In Rob's six seasons of pro ball he made it as high as Triple A. He started off in 1982 with the Gulf Coast League Rangers and made the jump to Double A the next year. After four games with Tulsa in 1984 he was promoted to Oklahoma City. Moving up fast.

1985 saw Rob back at Double A for the entire season. In 1986 he made it back up to Triple A and played the whole season for the Eighty Niners. That was the end of the line with Texas. In 1987 Rob was back down in Double A, this time with Houston.

Following the 1987 season Rob disappears. There is no indication as to how he moved from the Rangers to the Astros or why he called it a career. In fact, there was nothing to indicate how the Rangers even acquired Clark in the first place. I was also unable to find out where Rob is today.
Posted by Spiff at 5:28 PM

Rob now resides in Moore oklahoma is married has a son whom pitches in college. He currently teaches at Moore High school and for a period was the head coach of there baseball program. great guy happy to call him a friend.
Tom

Thanks for the information Tom. Please let Mr. Clark know that I would be very interested in doing an interview with him.