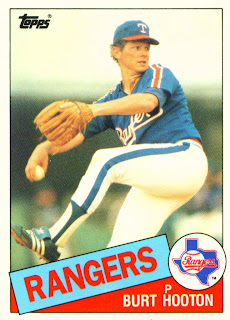 Zack Greinke won the AL Cy Young Award today. As much as I would have liked to see Scott Feldman with the award, I am glad Zack won it. The Royals need all the lift they can get and it is nice to see a different uniform in the highlight reel.

Since Zack never played for Texas I decided to see if he favorably compares to any pitchers who have. Checking baseball-reference.com I see that I am in luck. Listed as the third most similar at age 25 (Zack's current age) is none other than Burt Hooton.

One you move past the win-loss record it becomes clear that Greinke was the more dominating. Probably why he won the Cy Young Award at age 25 while Burt Hooton didn't get a single vote.
Posted by Spiff at 6:18 PM

You can't blame all those losses on him. No run support is hard to overcome. Nice card of Hoot.