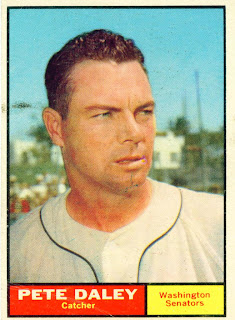 By the time the Senators drafted Pete from the A's he had six Big League seasons under his belt. For most of his career he had been a backup catcher with the Red Sox. The Sox had traded him to the A's after the 1959 season. In 1960 the A's had a catcher by committee system going but Pete was the primary catcher. The Senators drafted him that December in the expansion draft.

In 1961 Pete went back his familiar role as the second string catcher behind Gene Green. Even so, Pete played in almost as many games in 1961 as he had in 1960, falling just one game shy of his A's totals. Amazingly, Pete played 16.2 innings more for Washington than he had for KC.

In spite of his frequent appearances, Daley's 1961 season was dismal. His batting average plunged 71 points from the previous season to .192 for the season. His on base percentage dropped 67 points to .244 while his slugging percentage took a bigger dive as it dropped 124 points to .266. Pete managed just two home runs all season and grounded into 11 double plays. He struck out 37 times while working just 14 walks.

If Pete tried to look at his defense to redeem the season he was bound to be disappointed. He made four errors behind the plate and allowed seven passed balls. He also allowed 32 stolen bases while catching only 15 attempted thieves.

All in all Pete had an ugly season in the Senator's first year. It was his worst season ever both offensively and defensively. It was also his last as he was released in October of 1962 after spending that season in the minors.
Posted by Spiff at 4:10 PM