Who is Chris Stewart? 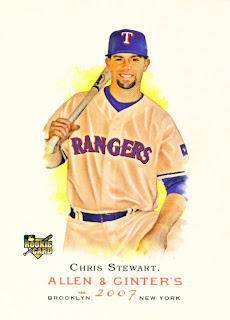 Chris Stewart is one of those players that I don't have any recollection of. Here he is though, on card number 254 of the 2007 Allen and Ginter set. This, along with his inclusion in the 2007 Topps regular set, sparked my interest.

According to Baseball-reference.com Chris made his major league debut in 2006 for the White Sox. He appeared in six games for them before being dealt to the Rangers in January of 2007. It was apparently a minor trade as the White Sox received one minor leaguer in return.

In 2007 Chris appeared in 17 games for Texas. This was almost a threefold increase in his playing time from the year before and a career high. According to the almighty Wikipedia, Chris snagged the backup catcher's job in Spring Training of that year. The Rangers then dropped Stewart to Triple A in early June after acquiring Adam Melhuse.

The Rangers released Chris in March of 2008. In April he signed with the Yankees on a minor league contract. He appeared in one game for them on April 29, 2008 before being granted free agency in November. The White Sox signed him in December. In March of this year the Sox sent Chris back to the Yankees for future considerations.

At least Chris has gotten a taste of the majors. That's a lot more than most of us can say. Playing at the Triple A level he is just an injury or two away from another call-up. I suppose that's a decent possibility for a catcher.
Posted by Spiff at 12:49 PM

Wow, talk about a forgotten man. I have never heard of him playing for the Yankees. I usually am on top of that stuff.