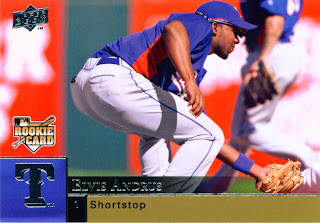 Elvis Andrus was featured on card number 944 of the 2009 Upper Deck set. He also played in 145 games for the Rangers this year as he became their starting shortstop in his first season above Double A ball. This for a team in contention until the last three or so games of the season. Andrew Bailey appeared in 68 games for Oakland as he nailed down their closer's slot in his first season in the Bigs. This for a team that was close to elimination by the All-Star break.

Elvis had 541 plate appearances for the Rangers. Bailey faced 325 batters for the A's.

Elvis played 1238 innings for Texas while compiling 261 putouts, 407 assists, 98 double plays, and 22 errors. This translated to a fielding percentage of .968 with a range factor per game of 4.61. The league average was 3.89. Bailey played 83.1 innings for Oakland while compiling 91 strikeouts, allowing 17 runs, 24 walks, and 5 home runs. This translated to a 1.84 ERA. I was unable to locate the league average ERA for closers.

Andrew Bailey won the AL Rookie of the Year today. Was Andrus shorted?
Posted by Spiff at 5:23 PM

Not really Rob- Andrus is a good fielder but a really mediocre hitter, especially for a good hitters park like Arlington. Bailey was dominant in his role.

I generally agree that the "closer" role isn't as important as it is portrayed. Andrus faced more pitchers than Bailey faced batters. But while Andrus was barely average, Bailey excelled.