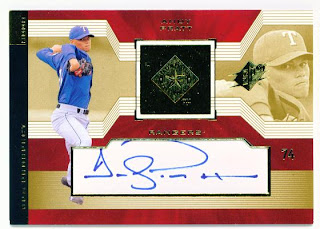 Today's random autograph card comes from the 2002 SPx Prospects set and is number 142 in the set. The card features Andy Pratt and one of his autographs.

When I first got this card in a lot I wondered who Andy Pratt was. That was as far as I got until today when I decided that I had better look him up on Baseball-reference.com.

The first thing that caught my attention was that Andy never played for the Rangers. He was selected in the ninth round of the 1998 draft. He signed shortly thereafter. In the same year he played with the Gulf Coast Rangers in the Rookie League. 1999 was A ball and in 2000 he moved up to Double A. His entire 2001 season was spent at Double A Tulsa.

In April of 2002 the Rangers traded Andy to the Braves for Ben Kozlowski. He finally made his debut with Atlanta in September of that year for one game. In 2004 he showed up four times for the Cubs. Those five games were the extent of Andy's MLB career. Not very many but probably five more than most of us.
Posted by Spiff at 3:56 PM