Yankees jump on top of Phils. 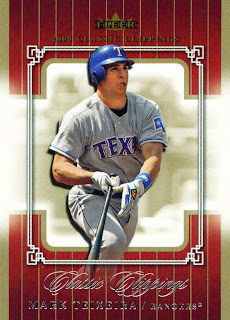 Let me start off by apologizing for missing yesterday's post. Should have had a congratulatory post for the Phillies to recognize their win Monday night. Had to work extra though and am trying to wade through a home improvement project so my time got eaten up.

It's not looking good for the Phils tonight in The Bronx. Hideki Matsui almost single-handedly booted Pedro Martinez from the game as he racked up four RBI. Mark Teixeira, shown here on card number 55 of the 2005 Classic Clippings set, also got in on the act with a RBI single.

Ryan Howard has responded with a homer but it is still 7-3 in the Yankees' favor. Time is running out too since the game is in the seventh inning.

Looks like the moral of the story will be that money can't buy you friends or happiness but it can buy you a championship.
Posted by Spiff at 9:28 PM

I don't think Red Sox fans agree. They spend just as much.

And they have been winning recently. They are also on the verge of becoming the Yankees Light.