What was he thinking? 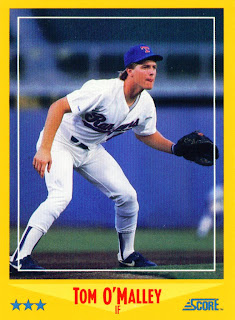 In 1988 Tom O'Malley was a utility infielder appearing on a truly ugly Score card, number 534. I mean, this card just doesn't have anything going for it. Not even the design. Yellow on a Rangers card? What was Score thinking?

I suppose I could ask the same thing about Omar Vizquel. Omar signed a one year contract with the White Sox today. That's not the part that raises questions. What makes me wonder is Omar's reported statement that he wasn't returning to the Rangers because he preferred a higher profile team. What did he mean by that? A team the President roots for? A team that had a worse record than the Rangers in 2009? It probably boils down to a team that has deeper pockets.

I understand Omar wanting more money. I don't understand him running his mouth like that. I have always heard that Vizquel is a class act. Not much class on display there. I mean, everyone knows that the Rangers are a small to mid-market team that hasn't ever won a post season series. The fans know the team can't afford to hang on to all the popular players. What's the point in making an issue out of it as you hit the road?

I enjoyed having Vizquel on the team this past season. He was fun to follow and a real star who grabbed my attention when he interviewed or played. Sadly my reaction to him leaving is about the same as when I see Tom O'Malley's 1988 Score card. What was Omar thinking?
Posted by Spiff at 7:22 PM