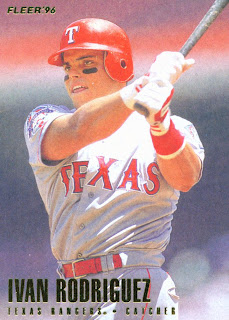 So the off-season movement has started. One of my least favorite things about modern baseball and the reason that most of my Rangers apparel has no players' names or numbers on it.

Ivan Rodriguez, seen here on card number 260 of the 1996 Fleer set, filed for free agency yesterday. He is interested in playing for two or three more years. The Rangers are at least moderately interested in having him back. No agreement yet though and it is unclear how hard Texas will pursue him. It would be nice to see Pudge retire in a Rangers' uniform but it isn't worth breaking the bank over.

Hank Blalock, Marlon Byrd, Eddie Guardado and Joaquin Benoit also all filed for free agency. I am unsure how the team views Benoit but they are planning on letting Blalock go. Guardado has talked about retiring this off-season and with his struggles towards the end of last season I just can't see the team dropping a lot of cash on him.

Byrd is on the list to re-sign. If it doesn't get done the team will have to look elsewhere for a right-handed bat. Jermaine Dye and Milton Bradley have both come up as possibilities. I would like to keep Marlon but would settle for Dye if need be. Bradley should be avoided at all costs.

In other news, Clint Hurdle has been named the new hitting coach. Hurdle did a decent job for the Rockies before being named as manager. It will be interesting to see how he adjusts to The Ballpark in Arlington as opposed to the Rockies' home.
Posted by Spiff at 6:05 PM