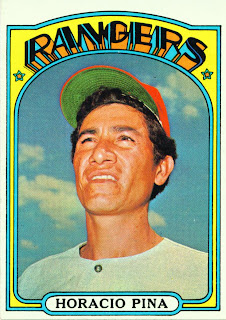 Horacio Pina appears here on card number 654 of the 1972 Topps set. He appears to be looking straight into the sun in order to avoid having his cap airbrushed. He also appears to be floating up into the sky as the photographer snaps the shot.

Horacio was a side-arming reliever with Texas in 1972. He had been with the team for 1970 and '71 and had made the move south with them. Moving to Texas moved Pina closer to home, he was born in Matamoros, Mexico and was living in Coahila, Mexico at the time.

Horacio responded well to the move as he compiled the best season of his career. He posted improved numbers in ERA (third best on the team), innings pitched, strikeouts (second in the bullpen), appearances (second on the team), and batters faced. He also raised his saves from 2 in 1971 to 15 in 1972 as he became the team's closer.
Posted by Spiff at 12:01 PM

The sky and clouds really make that card. That's a good one.