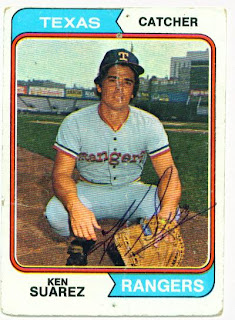 I traded for this sad-looking Ken Suarez card shortly after I started collecting. At the time it was the oldest card in my collection and cherished in spite of the pin holes, nicks, rounded corners, and crease up the middle. If ever a card looked like it had been through a war it is this one. Most of that damage was in place when I obtained the card. I still traded for it and still prized it.

When I recently upgraded the card out of my team set I just couldn't toss it. I sent it to Ken instead on November 25, 2008. It was back by December 3rd of the same year with Ken's signature in place. Now it's in a toploader with the rest of my Rangers autos.

Saw today where Jarrod Saltalamacchia's shoulder is acting up again. Could be bad news for next season what with Pudge maybe leaving. Hopefully the Rangers' catching situation doesn't end up in as sad of shape as this Ken Suarez card.
Posted by Spiff at 1:06 PM

I have greater feelings for my banged up cards. They have character which the pristine ones don't. Yours looks like a Mad Magazine fold in :)