Herzog to the Hall. 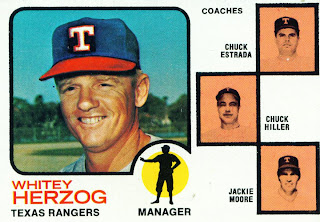 Whitey Herzog is in the Hall of Fame. He was elected by the Veterans Committee along with former umpire Doug Harvey.

While The White Rat is best known for his managerial career with the St. Louis Cardinals and Kansas City Royals, he also did a short stint in Arlington. Card number 549 in the 1973 set shows Whitey during his tenure as the Rangers second manager.

Whitey took over the team from Ted Williams when Williams quit after the 1972 season. In 138 games the Rangers struggled to a 47-91 record under Herzog in 1973. Owner Bob Short fired him on September 8th of that year. Short's excuse was that the team was struggling. Firing Whitey didn't help, the team finished 56-105 for the year.

The real reason Whitey had to go was so that Short could hire Billy Martin. That move would prove to be possibly one of the greatest blunders that Bob Short would make while he owned the Rangers. That's saying a lot. Bob Short made a lot of blunders. Of course Whitey Herzog won a lot of games.

Within two years of being fired, Herzog was on his way as he took over the Kansas City Royals. Following five winning seasons there he moved to the Cardinals and really took fire. In eleven seasons he had a winning reacord seven times. The result was three pennants, a World Series title, and a trip to Cooperstown.
Posted by Spiff at 5:18 PM

David Clyde will be happy about Herzog!

Herzog had a good Bob Short Story during his press conf y-day. Bob Short seems to be universally viewed as an idiot.

Well, I'm happy for him. He's been here for quite some time now and he definitely deserves recognition for his remarkable jobs done. Thanks for sharing. By the way, Premio Foods is one great company who has free goodies and recipes to cool sports fans out there. Enjoy!

No umpire should be in the Hall of Fame.
None.