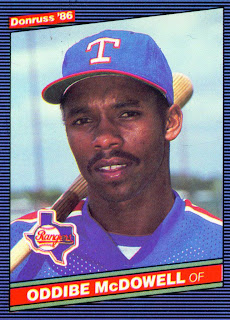 So I was trying to decide which set to do next on the wantlist post series when Oddibe McDowell showed up. He was carrying a bat and not looking happy. I guess he read the comments on a previous post asking what sets my readers disliked. Apparently he took umbrage at Night Owl's nomination of 1986 Donruss as a most hated set. After all, card number 56 is his rookie card.

Hey, don't look at me Oddibe, Night Owl said it. I'm not knocking your rookie card, in fact I'm asking for more cards from the set if anyone has them for trade. Here's what I need:

See? Looking for your teammates. Now, just put the bat down. Slowly. Please.
Posted by Spiff at 4:16 PM

I'd help you if I could, but I hated the set then, too. So I bought none of it.