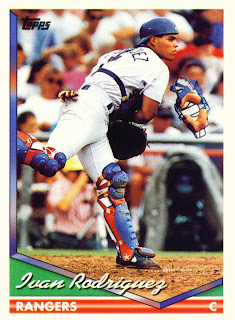 This is why I hate this time of year. Why I am not sure that Curt Flood did the right thing. Ivan Rodriguez turned down arbitration last night. Today he signed a two year deal with the Washington Nationals.

I was thrilled this past season to have Pudge back in a Rangers uniform the way he is depicted on card number 165 of the 1994 Topps set. Having him back erased some of the pain of losing him the first time. Now I have to say goodbye again.

It's happened twice. Neither time was a trade. Blasted free agency both times. This time at least the club made an effort to keep him. Still stinks though, to say goodbye again. This time I am afraid it's for good, I don't foresee Ivan back in a Rangers cap until he enters Cooperstown.
Posted by Spiff at 6:46 PM

It's funny how much I've come to dread the offseason. Sorry to see you lose Pudge again.