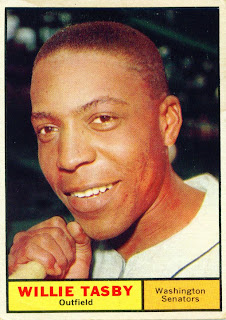 On this cold December day we are greeted with the smiling visage of Willie Tasby on card number 458 of the 1961 Topps set. Like the previous two Senators we have seen, Willie appears hatless in the jersey of another team. In Willie's case the jersey belongs to the Boston Red Sox.

When Washington drafted Tasby from the BoSox in December of 1960 he had three Big League seasons under his belt. Two and a half of those seasons had been with the Orioles, although he had originally signed with that franchise while it was in St. Louis. In 1960 the O's traded him to Boston who then left him unprotected in the expansion draft. Good thing for the Senators they did.

While patrolling center field Willie posted a .985 fielding percentage in 1,187 innings played. He committed 5 errors in 339 chances. He had 5 assists and 329 putouts.

While not a star, Willie was at least a solid player on a weak Senators team that could use all the help it could get in 1961.
Posted by Spiff at 4:38 PM