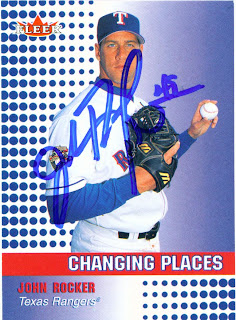 Not that I am a big fan of John Rocker but he did return this 2002 Fleer card to me earlier this year. It took him about a month and half to sign it and get it back but he did it.

Just like the card says, there are a lot of MLB players changing places. That includes some ones that I have been surprised at.

The Rangers traded former Rocker teammate Kevin Millwood yesterday to the Orioles. In exchange they got reliever Chris Ray. Hopefully Ray works out in the pen and Millwood helps the Orioles sock it to the Yanks and Red Sox a little.

The trade allowed Texas to sign starting pitcher Rich Harden. Apparently the deal is only awaiting a physical to be final. It would be nice to see Harden return to his early career form in 2010.

As if that maneuvering wasn't enough, the team has apparently pulled a off a trade with Boston for Mike Lowell. The BoSox will receive minor league catcher Max Ramirez in return and will have to pick up a substantial part of Lowell's salary as well. The Commissioner's office has to approve the trade before it can be finalized.

Lots of trades so far, more than the Rangers were involved in last off-season. Some of the moves look good and I think the jury is still out on some. Time will tell if these exchanges and signings will put the team over the top in 2010.
Posted by Spiff at 11:30 AM