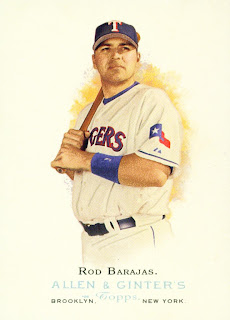 So now that Pudge is gone and Salty is not looking good for the upcoming season, the Rangers are on the hunt for a catcher to fill the hole left by those two. Jason Kindall is one name that has been floated as a possibility. Another is former Ranger Rod Barajas. Barajas was the Rangers catcher from 2004 to 2006 before he left as a free agent. Since then he has played with the Phillies and Blue Jays.

Ron Washington knows Kendall from when Jason played for the A's and the organization knows Barajas from when he played for Texas. Both seem to have an equal chance. I haven't kept up on either of them so I am not sure I have an opinion one way or the other.

I do have an opinion about the 2006 Allen & Ginter set, of which Rod Barajas is number 216. I like the set and would like to finish off the team set. Here is what I am looking for to fill the holes in my team set:

If you have any of these cards and are interested in parting with them just drop me an email. My tradelist is here and I can do team lot trades as well. The past few wantlists I have posted have not generated a trade so I am hoping this one will reverse the trend.
Posted by Spiff at 1:06 PM

Labels: Allen and Ginter, Card of the Day, Wantlist