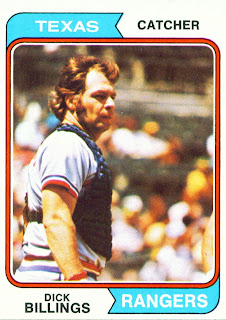 I must say, I like this picture of Richard Billings on card number 466 of the 1974 Topps set. Kind of makes Dick look old-school.

Billings was somewhat old-school by 1974. He had been with the franchise since 1965 and had been playing in the Big Leagues since 1968. During that time he had been the first-string catcher for just one season, 1972. In 1974 he would experience what would become a common occurrence for catchers in the Rangers organization for the next ten years. He would be blocked by Jim Sundberg.

With the rookie Sunny taking the lion's share of the playing time Dick would only see 35 plate appearances by August 12, 1974. At that point the Rangers sold Billings and his .226 batting average to the St. Louis Cardinals.

The move didn't agree with Dick Billings though. Two seasons and just four games later his Major League career would be over.
Posted by Spiff at 7:39 PM