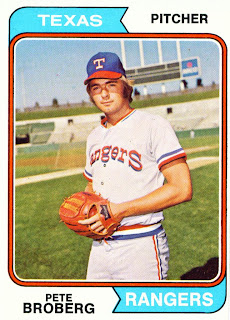 Today we see Pete Broberg on card number 425 of the 1974 set. The world's looking a bit off-kilter behind Pete but he seems to be taking all in stride.

Pete split the 1974 season almost evenly between the Majors and Triple A. He appeared in 12 games for the Rangers and 14 for Triple A Spokane. His roles flipped between the two clubs. In the minors he started 12 of the 14 games he appeared in. For Texas he started just two of 12 games.

With the Rangers Pete was mainly middle relief. He started just two games and finished just two. All in all he would log 29 innings in his 12 games. They were a rough 29 innings. He posted an astronomical 8.07 ERA - the worst of his career and the worst on the the regular pitching staff for Texas in 1974. In addition Pete lost four games while winning none.

Not real sparkling numbers for the pitcher that had been a wonder-kid just a few short seasons before. Apparently the Rangers had seen enough to decide that Pete just couldn't live up to his billing. On December 5, 1974 they sent him to the Milwaukee Brewers in exchange for Clyde Wright
Posted by Spiff at 10:07 PM