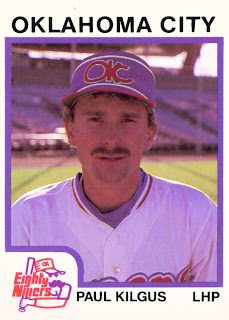 Paul Kilgus, shown here on card number 133 of the 1987 ProCards set, was drafted by the Rangers in 1984. 1987 would be his year to get the call. In fact, Paul would appear in four more games for Texas than he would for Triple A Oklahoma City.

For the Eighty-Niners Kilgus took the hill 21 times in 1987. All of his appearances were in relief. In all he would toss 24.2 innings and post a not very impressive 4.01 ERA. Paul would fan 14 batters while walking 13. Three of those walks were intentional. Paul's WHIP was 1.338.

All told, Paul Kilgus didn't have a very impressive season at Triple A in 1987. However, the Rangers were short on good pitching in 1987 and Paul was a left-hander. Those factors combined to send him to the Major Leagues. Kilgus looked to be on his way.
Posted by Spiff at 7:56 PM