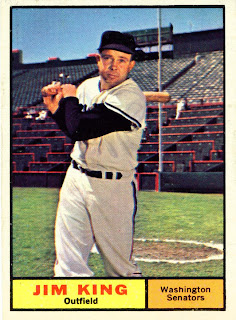 Jim King shows up today on card number 351 of the 1961 Topps set. Jim's sporting the first posed shot of the team set. Gotta like to look of the on-deck circle behind Jim. Doesn't look much like the ones in the MLB ballparks today. Of course, this picture might be from a minor league park, Jim's last appearance in the Major Leagues before showing up with Washington was in 1958.

The Senators picked King up from the Cleveland Indians in the expansion draft. He would appear in 110 games in 1961, mostly as a back-up outfielder.

In his 306 plate appearances King would post a .270 batting average and a .363 on-base percentage. He would walk 38 times while striking out 45. His 12 doubles and 11 home runs contributed to his .449 slugging percentage. It was Jim's best offensive season in the Majors to that point.

His defensive numbers weren't bad either. His .980 fielding percentage was three points higher than the league average.

All in all Jim King didn't have too bad a year in 1961. The back of this card says that "Jim is determined to win a permanent major league home for himself..." From all appearances he was well on his way to doing just that.

***Late addition to the post. I just realized that this post marks the one year anniversary of Senators Saturday. Hope everyone has enjoyed the run so far.***
Posted by Spiff at 9:13 PM

The stadium in the background is San Francisco's Seals Stadium, the SF Giant's first stadium. The picture is from 1958 when King was a giant that year.

Ah, makes sense. I had seen where Jim was with the Giants his last MLB season but wasn't sure if the picture was that old. Thanks for the input.