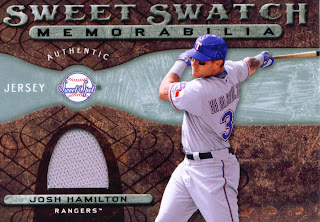 Well, the MLB awards season is in full swing. Today the Silver Slugger awards were announced. Unlike the Gold Glove awards, the Rangers were not shut out of this category.

Vladimir Guerrero won the award for the Designated Hitter position. That's great even if I still cringe at the DH being called a position. This was Vlad's 8th award.

The other Ranger who won was Josh Hamilton. Josh, shown here on his 2009 Sweet Spot Sweet Swatch card, picked up his second silver bat. Not really any surprise there as he won the batting title for the American League and is in consideration for MVP.

Good to see Texas picking up some hardware. Hopefully the trend continues in the Rookie of the Year, MVP, and Manager of the Year categories as well.
Posted by Spiff at 6:49 PM