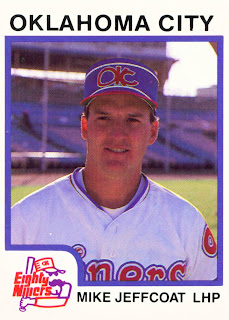 By the time Mike Jeffcoat appeared on card number 142 of the 1987 ProCards set he had already been in the Major Leagues for three seasons. Between 1983 and 1985 Mike pitched for the Cleveland Indians and San Francisco Giants. In December of 1986 he signed with the Rangers as a free agent after spending the 1986 season in the Giants' system.

Jeffcoat would start two games for the Rangers in 1987 but would spend the rest of the season with Triple A Oklahoma City.

Mike would get 24 starts in 26 appearances with the Eighty-Niners and would toss 159.2 innings. He would post a 4.79 ERA and a 1.466 WHIP. Neither number was pretty. Of course neither were the 14 home runs he allowed. Those totals are probably why he spent the majority of the season in OKC.

Mike did strike out 101 batters while walking less than half that number - 41. That showed some promise. As a result, Texas would hold on to him. Mike looked to still have a couple of chances left to get back to the Majors.
Posted by Spiff at 12:51 PM