A.L. Rookie of the Year. 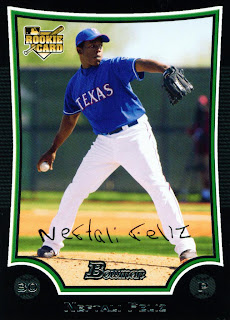 Yes, I know it's supposed to be Minor League Monday but I only have one minor league card of Naftali Feliz and I have already posted it. That means you'll have to settle for this 2009 Bowman card number BDP17.

Thought that today's announcement of Feliz winning the American League Rookie of the Year was worth the deviation from the normal posting schedule.

Awesome to see Neftali win the award, he deserves it. His rookie record 40 saves and 2.73 ERA were the big numbers. He also struck out 71 batters in 69.1 innings. Neftali is just lights out when he's on and he was most of the season. Nice to see Texas with a young pitcher like this.

This is the first time a Ranger has won the ROY award since Mike Hargrove did it in 1974. Feliz is also only the third reliever to win the award in the American League. How about that? A Word Series and ROY drought ended the same year. Very cool.
Posted by Spiff at 9:37 PM