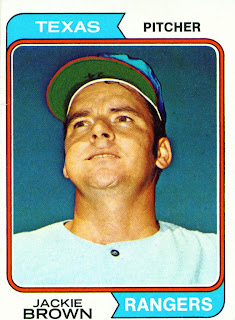 Jackie Brown shows up today on what is the worst-looking card I have posted to date from the 1974 Topps set, number 89. I have to wonder what happened. I mean, the Rangers had been in existence since 1972 and Jackie had been with the franchise since 1970. Why the odd angle and airbrush job?

Jackie split his time between the rotation and the bullpen in 1974. He got 26 starts in 35 games. He would complete nine of those starts, two of them were shutouts. In total he would toss 216.2 innings. That was a career high and put him third on the team in innings pitched. His 13-12 record was also third best in the starting rotation.

All in all Jackie had what appeared to be a breakout year. It seemed that his surge came just in time as the Rangers were looking to finally be a force. Things were looking up for Brown it seemed.
Posted by Spiff at 10:24 AM