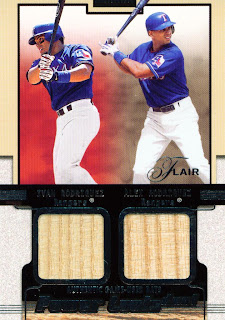 Been awhile since we had an installment on T.R. Sullivan's Fifty Best Seasons list. Since the Rangers are off today and tomorrow I thought this might be a good time to get in another season.

Number eight on T.R.'s list is Alex Rodriguez's 2001 season. Alex, seen here on a 2002 Flair Power Tools Dual game-used card, had monster seasons all three years he was with Texas. That makes it kind of a flip of the coin as to which was his best.

In 2001 Rodriguez played in a league-leading 162 games. He had 732 plate appearances, posted a .318 batting average, and a .399 on-base percentage. He led the league in runs scored with 133 (a Rangers club record), and home runs with 52. His 135 RBI were third-best in the league and easily led the team. His 34 doubles were also a team best and he also managed to steal 18 bases while getting caught just three times.

In the field he committed just 18 errors in 749 chances over 1,395.1 innings. That gave him a fielding percentage of .976 - three points higher than the league average.

Rodriguez took home a Silver Slugger award and was named to the All-Star team for his efforts. He also received some MVP consideration.
Posted by Spiff at 9:51 AM

I don't deny the numbers he put up as a Ranger were incredible, but he's still one of my least favorite ex-Rangers ever.

Same here. I just wasn't sure that a post pointing out how good a season he had was a good time for me to repeat my opinion in that regard.