Coming home for the ALCS finale. 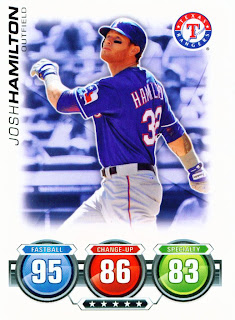 Well, after a 1-2 road trip to Detroit the Rangers are back in Arlington to host the Tigers tonight. The ALCS stands at 3-2 in Texas' favor with two games left in Texas. If would be really nice to see the Rangers end the series tonight. A couple of days extra rest for a few of the guys might help ease some of their nagging injuries. There are a few things that Texas needs to see happen for a win tonight.

Derek Holland needs to be on. Dutch started game two but went only 2.2 innings and gave up three runs before Ron Washington pulled him. Normally Derek either has it or he doesn't. He needs to have it tonight and hold the Tigers down deep into the game. Traditionally Dutch doesn't have two off starts in a row, that needs to hold true tonight.

Josh Hamilton needs to power up. Hamilton, shown here on his 2010 Topps Attax card, is dealing with a strained groin. That kept him out of the Rangers optional workout yesterday. It has also killed his power during the playoffs. Hopefully the day of rest can put the boom back in Josh's bat.

Michael Young needs to keep the spark in his bat. Michael has been in a slump but has had multi-hit games the past two games and knocked his first extra base hit in game five. That spark of life needs to become a flame fast.

The defense needs to hold. Defense wins games and keeps your pitcher confident. The Rangers need both a win and confidence right now. Watch Adrian Beltre at third - his knee is a concern after he fouled a ball off it in game three.

The bullpen needs to keep the lights out. Overall the Rangers pen has done pretty well during the playoffs. With Washington being quick on the hook during this series the relievers will likely see action. Another great performance is in order.

If the pitching holds and the offense gives Derek Holland his normal robust run support the night could go well. Let's hope it does.
Posted by Spiff at 1:53 PM