It's all about pitching. 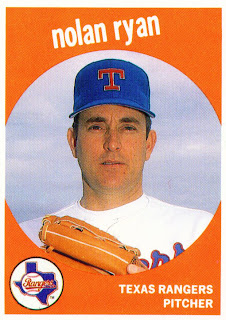 Under the watchful eye of Nolan Ryan, seen here on card number 45 of the 1989 Baseball Cards Magazine set, the Rangers have emphasized pitching in the past few years. The question remains though, have they improved over last year's World Series team? As in yesterday's post, all stats are from the entire year. Let's work through the rotation and then look at the bullpen.

I am sure I am leaving some guys out here since I can't completely recall last year's pen. I will say that I feel much more comfortable with this year's group of guys. With the exception of Uehara and Tateyama they are all pretty solid and generally keep the lights out. Going to have to go with 2011 on this one.

Ok, here's the rundown:
Number one starter - Tie
Number two starter - 2010
Number three starter - 2011
Number four starter - 2010
Bullpen - 2011
Closer - 2010
Not as encouraging as yesterday's post. The pitching isn't bad but it looks like some ground has been lost. The staff is good enough to keep the team going but if the offense shuts down then there could be serious problems.
Posted by Spiff at 10:54 AM