Well that was a surprise! 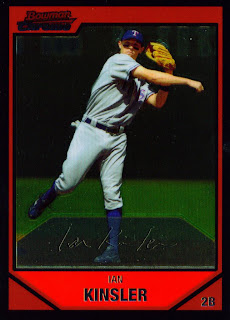 Well, I was going to write about Colby Lewis throwing six innings of one-hit ball yesterday to get the win over Tampa Bay. I was going to mention how this appears to be the year of Napoli as Mike continues to dismantle opposing pitching. I was even going to touch on Nap's stolen base. Of course Josh Hamilton, Craig Gentry, Neftali Feliz, and Elvis Andrus were all in for a mention as well.

I was running late though and didn't get the post up before the start of today's game. As I was looking for a card to post, Ian Kinsler hammered the second pitch he saw for a home run to give Texas an early lead. That made me decide to post card number 18 of the 2007 Bowman Chrome set. The shot was Kinsler's first of this year's postseason. Way to go Ian!

Now that Matt Harrison has a lead he just needs to hold it and give the offense some room to add on.
Posted by Spiff at 1:13 PM