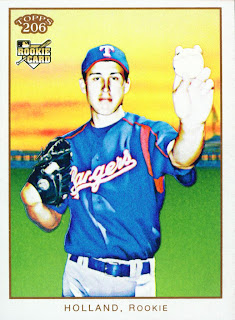 Sure, Mike Napoli made all the noise with his three-run home run last night. We all know that chicks dig the long ball and it's pretty clear that Nap can grow a better mustache than Derek Holland.

In spite of all that Holland's 2009 Topps 206 card, number 61, is the card of the day. With Texas down 2-1 in the World Series they absolutely had to win last night. Derek Holland made sure they did. Dutch went 8.1 innings shutout innings while giving up just two hits. he struck out seven Redbirds while walking just two before handing the game over to Neftali Feliz with two outs left.

Feliz was a little wild but kept the Cards shut down to seal the 4-0 Rangers win. Evens the Series at two games each and gives the Texas bullpen a much-needed breather. Hope to see C.J. Wilson come out tonight and follow Holland's lead.
Posted by Spiff at 5:38 PM

Good night Spiff! My stomach is so twisted up with nervousness and excitedness, I can barely compose a thought much less a post. Thanks for the recaps!