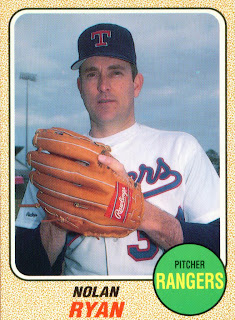 In 1993 when Nolan Ryan posed for card number 30 in the Baseball Cards Magazine set I don't think that anyone was predicting that someday he would be the team president.

When he was hired as the Rangers team president I doubt too many people thought he would be an owner soon thereafter. He was though.

This past spring Nolan said he thought the Rangers would win 90-95 games this year and take the division. There was a lot of scoffing. They won 96 and the division.

Here's to hoping that Ryan can keep his prediction streak alive. If Texas wins tonight he will have been right again - Rangers in six.

Someone asked me today, and I could not answer... How many guys have ended up owning a team they played for? I can't think of anyone other than Ryan.

Off the top of my head I can't come up with anyone else either. Comiskey was a player as well but not with Chicago.