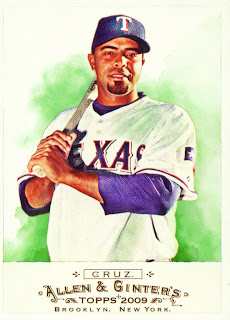 So rain seems to be the real story of the ALCS right now. It rained enough on Saturday evening to force two different rain delays in the fifth inning. Last night there was enough rain to postpone the game to this afternoon. That's good news. North Texas has been bone dry and could use every drop that fell in the past two days.

Other good news is that the Rangers managed to beat Tigers' ace Justin Verlander on Saturday to take game one. C.J. Wilson struggled some between rain delays but the bullpen came in and held the lead to get the 3-2 win.

Very nice to see the pen perform like it is supposed to. Even nicer to see Nellie Cruz get his bat back. Cruz, seen here on card number 227 of the 2009 Allen and Ginter set, had really stumbled in the ALDS. On Saturday he seemed to shake it off a little as he parked a Verlander pitch over the outfield wall in the bottom of the fourth. That solo homer proved to be the margin of victory that the Rangers would need. Hopefully it will also prove to be the return of Nellie's offense.
Posted by Spiff at 8:56 AM