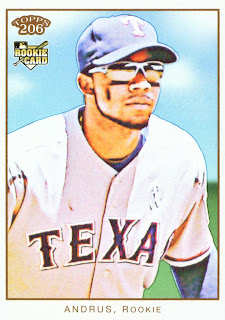 Wow! Last night's game was a heart-stopper to be sure. Fortunately the Rangers played some good ball and were able to pull the win out at the last minute.

Where to start? Well how about with Colby Lewis who delivered 6.2 innings of dominate pitching. The one run he did allow came in after Alexi Ogando took over. Very nice to see the starting rotation show up for the post-season. Lewis got a no decision but was simply fabulous.

Most of the reason that Lewis did so well was his execution. The defense behind him played a role though. Elvis Andrus, shown here on card number 138 of the 2009 Topps 206 set, showed everyone why he is so highly regarded in Texas. Elvis saved at least one run - probably more with two spectacular diving plays. Ian Kinsler played a role as well as he was able to read Andrus' mind and position himself well on each play.

In spite of all that the Cardinals led the pitchers duel 1-0 heading into the bottom of the ninth. I have to admit that I was already trying to figure the chances of the Rangers coming back from a two game hole. I was premature.

Kinsler led off the inning with a single and then stole second. Andrus then singled him to third and took second on a missed cutoff. Josh Hamilton and Michael Young then delivered to straight sacrifice flies to score Kinsler and Andrus. Neftali Feliz came in and worked the save around a lead off walk. Whew! Talk about a nail-biter.

Interesting trivia. Last night was only the third time in the history of the World Series that a team rallied with two or more runs in the ninth inning or later to win the game. The other two teams? The 1911 A's and the 1985 Royals. Both teams ended up winning the Series. Hope that's a sign of things to come.
Posted by Spiff at 10:08 PM