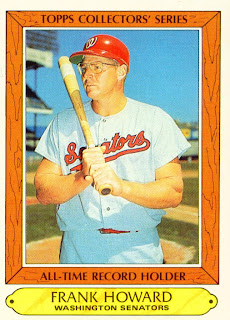 I know, I know. The American League Championship Series is going on. Problem is that I don't have access to a scanner for a couple of days so I had to pre-write today and tomorrow's posts. As such they won't match what is going on in the playoffs.

Number nine on T.R. Sullivan's list of the fifty best seasons in Rangers history marks the first appearance on the list by a Senator. Of course this is appropriate since Frank Howard's Senators later moved to Texas.

1969 was the only winning season the Senators experienced in eleven years in Washington D.C. It was also in the midst of the peak of Frank Howard's career.

Hondo played in 161 games in 1969 and made 702 plate appearances in the course of the season. He posted a .296 batting average and a .402 on-base percentage. The batting average was a team best and the on-base percentage was second best on the club. As a result of the on-base percentage Frank scored 111 runs - easily the best on the team. He also hit 17 doubles and 48 home runs (second best in the A.L.). Those numbers helped him amass the team best 111 RBI that he knocked in during the season. Amazingly for a power hitter, Howard actually walked (102) more times than he struck out (96).

People other than Senators fans noticed Frank Howard's season. He was named to the All-Star game and even received some serious MVP consideration.
Posted by Spiff at 10:50 AM

I am a life long Yankee fan going back to the early 60s, but I always was a big frank Howard fan,
Got to meet and talks to him while he was a coach for the Tampa Bay Devil Rays, Always a classy guy who took time to talk to the fans of all ages.