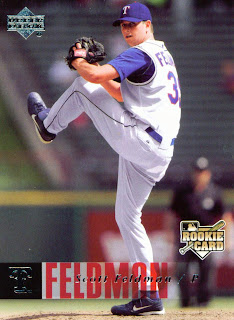 If it wasn't for Scott Feldman, shown here on card number 371 of the 2006 Upper Deck, the afternoon could have been worse. C.J. Wilson gave up eight runs (six earned) in five innings. That put the game out of reach. Feldman took over in the sixth inning and went three scoreless frames while allowing just two hits.

If it wasn't for Josh Hamilton Texas might have gotten no-hit. Josh went 2-for-4. That was the total of the Rangers' offense. Good thing Hamilton at least brought his bat to the game.

Certainly the wrong way to start off the series. Down one game the Rangers are already looking at an uphill climb. With James Shields starting tonight for Tampa Bay the hill is even steeper. Hope Derek Holland is on.
Posted by Spiff at 1:56 PM