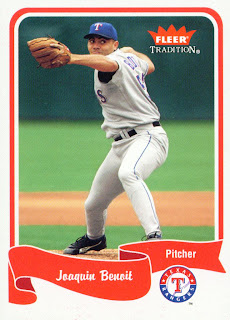 So the Tigers downed the Yankees last night to win their side of the ALDS. The win came in part thanks to former Ranger Joaquin Benoit, shown here on card number 423 of the 2004 Fleer Tradition set. Now the Tigers are headed to Arlington for the kickoff of the ALCS tomorrow.

So far Ron Washington has announced that C.J. Wilson will start game one. Jim Leyland has stated that Justin Verlander is headed to the bump for the Tigers. Hopefully C.J. can hang tough. I have a feeling Verlander will so it could be a close game. A clunker like Wilson threw in game one of the ALDS could be real trouble.

I've got to be honest, I was hoping for the Yankees. Detroit is going to be tough and the Rangers never play well in MoTown it seems. I would have felt a lot more confident headed into a series with New York. At least Texas has home field advantage. Hopefully they can take advantage of that and prove my forebodings wrong.

Anyone else a bit nervous about the Tigers coming to town with it all on the line?
Posted by Spiff at 10:11 AM