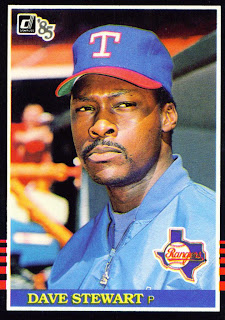 Number nine on T.R. Sullivan's Fifty Bizarre moments involves Dave Stewart. In January of 1985 Stewart, shown here on card 343 of the 1985 Donruss set, was a yet to be determined quality for the Rangers.

He was however well regarded among his teammates and the organization. As such he was selected to received the Harold McKinney Good Guy Award at the club's 1985 Winter Banquet on January 27th. Along with the rest of the team, Stewart was invited to the Banquet.

Here is where things started to go wrong for Dave. According to the Los Angeles Times he was arrested on January 25th in downtown L.A. "on suspicion of participating in an act of lewd conduct in a public place..." Apparently LAPD officers had observed Stewart soliciting a prostitute by the name of "Lucille". The pair were arrested as they sat in Stewart's car in an alley.

To add insult to injury (and spice to the tabloids) it was revealed after the arrest that "Lucille" was actually a man by the name of Elson Tyler. Stewart claimed that he had no idea he had picked up a transvestite until after the arrest. A LAPD commander commenting on the story stated that the police believed him on that score. It didn't help and the incident got serious media exposure.

The Rangers gave Dave the opportunity to skip the Winter Banquet. He didn't though and showed up to receive his Good Guy Award. Newly minted GM Tom Grieve and team owner Eddie Chiles were among those in attendance as were the rest of the team and almost 1,000 fans. The presentation of the award was greeted with silence. Stewart then apologized directly to Mr. Chiles, his teammates, then to the fans. According to the L.A. Times Stewart was brief in his remarks and commented that, "All I can say is good guys make mistakes, too." As he sat down those in attendance applauded. I am guessing that Tom Grieve then sighed a huge sigh of relief.

All in all the whole situation was an awkward one for both Stewart and the team. It was also truly strange that a man arrested for solicitation was awarded a good guy award just two days later at a public event.
Posted by Spiff at 7:50 PM