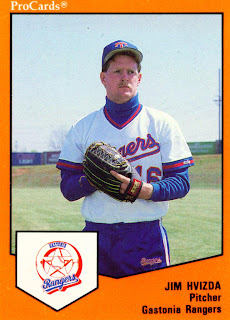 Well, it's hard to believe that I haven't had a Minor League Monday post since August. Guess that's what happens when there is a post season to talk about. To bring back the series we have Jim Hvizda on card number 1019 of the 1989 ProCards set.

Hard to find much on Jim Hvizda. Looks like the Rangers picked him up as the 19th selection in the 1988 draft. He played Rookie level ball that year with the Butte Copper Kings. Even though he posted a 4.50 ERA in 42 innings pitched he was promoted to A ball for the 1989 season.

Those numbers were a nice improvement over Hvizda's first season. In a pitcher needy organization like Texas they were more than welcome. They also earned Jim a ticket to A+ Charlotte for the 1990 season. In spite of the hiccup in Rookie ball, Jim Hvizda's career in pro baseball seemed to be off to a good start.
Posted by Spiff at 9:49 AM

He just murdered his wife in Chester county, pa

My former Boss, Great Character, kind,Generous,Good Sence of Humor. Great Guy,Good Person. Wife was very Sweet lady. This makes NO SENSE, COMPLETELY UNIMAGINABLE!!
Jim would give you the Shirt Off his Back.This is Unbeleiveable!!!
WHY???

An article that told about his sentencing stated that he had developed a severe drinking problem. Very sad that alcohol & substance abuse can cause so much pain & heartache. I doubt it would have ended this way without the substance abuse.

And alcoholism/substance abuse can happen to good people. It can take a good person & completely change them. It is something that happens over time & no one thinks it will happen to them.