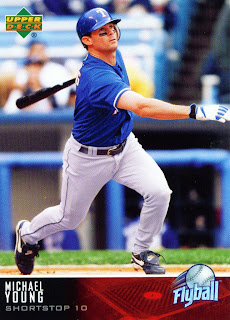 No, not a beer salute. Michael Young, shown here on card number 77 of the 2005 Upper Deck Flyball set, was named the Marvin Miller Man of the Year yesterday. This is the second time Young has won the award. He won it for the first time in 2008. Michael joins Jim Thome and John Smoltz as the only players to have won the award twice.

The award is given by the Major League Baseball Players Association. In explanation of the award I quote MLB.com which says the award "is given to a player 'whose on-field and off-field performance most inspires others to higher levels of achievement by displaying as much passion to give back to others as he shows between the lines on the baseball diamond.'"

Nice to see Young get the award. Michael's had the reputation as a nice guy and a team player. Good to see he still has it. Hopefully his preseason antics this past Spring were just that, antics and not a new pattern of behaviour.
Posted by Spiff at 12:08 PM