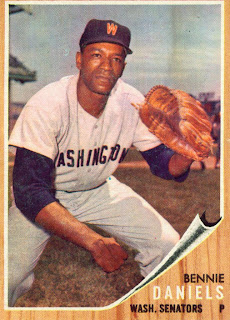 Let me start off by saying that there is a top border on my copy of card 378 of the 1962 Topps set. I'm not sure why the scanner insisted in cutting almost all of it off the scan. Perhaps it is messing with Bennie Daniels.

After a decent 1961 season Bennie was probably looking to build on that and secure a place in the top of the rotation in 1962. After all, he had tied for the most innings pitched, led in wins, and posted the second best ERA of any Senators starter in 1961.

Unfortunately for Bennie, and for Washington, 1962 would be a drop-off. Bennie's innings pitched dropped to 161.1, probably because he had lost a regular spot in the rotation. Of the 44 games he appeared in he started just 21. In spite of fewer innings his ERA rose by 1.41 to an unattractive 4.85. His WHIP was also up to 1.488 and his strikeout to walk ratio dropped to 0.97.

Needless to say, Daniels' 1962 season was not a positive follow-up to the Senators' inaugural effort. Probably one of the reasons that he managed to stay in the Majors was the lack of a developed farm system. However, if he wanted to stay there his 1963 season needed to be an improvement.
Posted by Spiff at 10:46 AM