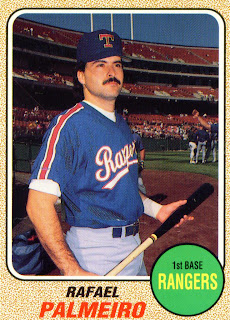 Rafael Palmeiro's 1993 season is number 11 on T.R. Sullivan's Fifty Best Seasons in Rangers history. By 1993 Palmeiro, pictured here on his 1993 Sports Cards Magazine card, had been with the Rangers for four years. His fifth season would be the final one before free agency and a five year hiatus to Baltimore.

Palmeiro played in 160 games for the Rangers in 1993. In all of those games he played at first base, a league best. Over the course of 1395.1 innings he committed just five errors for a .997 fielding percentage. That was four points higher than the league average and third highest in the American League. Interestingly, it was also higher than in any of the three later years where he won a Gold Glove.

At the plate Rafael posted a .295 batting average and a .371 on-base percentage in 686 plate appearances. He had 37 home runs, 40 doubles, and two triples. He also stole 22 bases while getting caught just three times. He also knocked in 105 RBI while scoring a league-leading 124 times himself. Perhaps Palmeiro's performance at the plate could best be summed up as balanced.

While Raffy would have better power numbers when he returned to Texas in 1999 he was a better all-around player in 1993. It was his breakthrough season.
Posted by Spiff at 11:45 AM