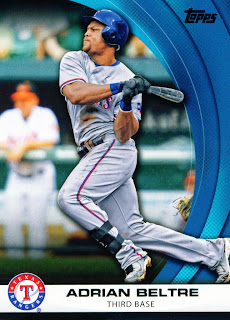 After two years of no Gold Glove winners the Rangers have one this year. Adrian Beltre, shown here on his 2011 Topps Sapphire Blue card, was announced as the third base winner last night. This is Beltre's third Gold Glove.

Adrian had a .965 fielding percentage this past season with just 11 errors. He was also ranked third in the league in range factor among third basemen. One thing's for sure, Adrian is a joy to watch play defense. Some of the plays he makes are pure gold.

Beltre's Gold Glove this year marks the first time a Ranger has won the award at third since Buddy Bell won his sixth straight in 1984.