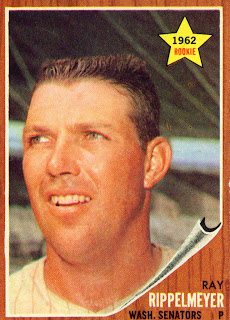 Ray Ripplemeyer appears today on card number 271 of the 1962 Topps set. The photo is probably a little off to avoid showing any more of Ray's Reds pinstripes than necessary.

Washington picked Ray up from Cincinnati in November of 1961 during the Rule 5 draft. That meant that he had to be on the Senators Major League roster all season or be returned to the Reds.

Ray ended up playing in 18 games for Washington in 1962. Most of his appearances were in relief as he started just one game. All told he would spend 39.1 innings on the mound and face 179 batters. Ripplemeyer's ERA tallied to an ugly 5.49 and his WHIP to a monstrous 1.627. He walked as many batters as he struck out (17). Those were some bad numbers, even for the Senators.

Ray tried to make up for his pitching performance at the plate. He had six plate appearances and batted an amazing (for a pitcher) .500. One of his three hits was a solo shot home run and one was a double. That's some pretty decent power for a pitcher.

Unfortunately for Ray, the Senators didn't seem to think his bat was worth putting up with his arm. On July 11, 1962 they returned him to the Reds. He would spend the rest of the year in the minors. Following the 1965 season he hung up the spikes, his time with Washington his only Major League experience.
Posted by Spiff at 12:27 PM

Ripplemeyer was the Phillies' pitching coach in the 1970s.