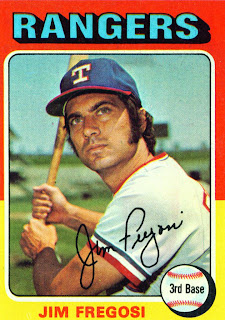 Despite what card number 339 of the 1975 Topps says, Jim Fregosi spent most of his time in 1975 playing first base rather than third. He did play third and occasionally served as the designated hitter but most of his time was spent platooning with Jim Spencer at first.

Fregosi played in 54 games at first and logged 336.1 innings at the bag. He committed six errors for a fielding percentage of .985. That was five points below the league average. In contrast he got just four appearances at third for a total of ten innings.

Mainly employed against left-hand pitching, Jim got 217 plate appearances in 77 games. He ended the season with a .262 batting average and a .329 on-base percentage. Most of the rest of his offensive numbers were about as unremarkable. He struck out 39 times and walked 20. He also bumped in 33 RBI while scoring 25 times himself. Of his hits five were doubles and seven were home runs. He hit no triples and stole no bases.

For Jim Fregosi 1975 had been almost identical to 1974. Most of his offensive numbers were within a few points of the previous season. He had played more at first than third but at this point in his career he was a corner infield backup. He didn't let that get to him though and kept working with younger players to teach them the game.
Posted by Spiff at 11:08 AM

I'll never get used to Fregosi in anything but an Angels uniform. Sorry.